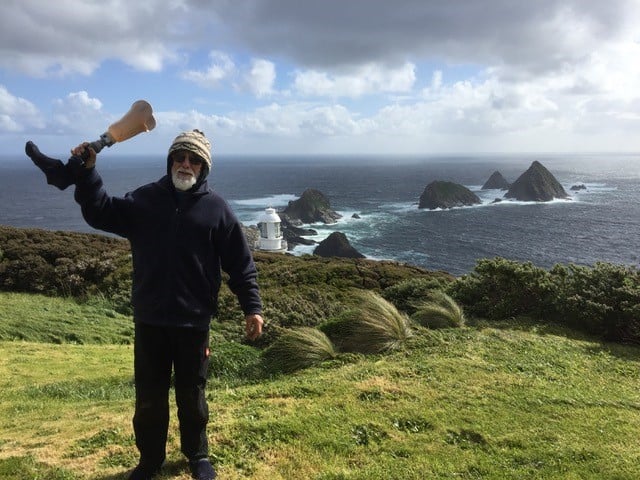 This is the first of a series of articles that I intend to write about my experiences with Australian Domestic Airport Security Screening operations since I became a lower leg amputee over 20 years ago. I intend to explain :-

During the past 20 years I have never been able to understand why I am treated very well and have a pleasant experience with Security Screening Operators at some Airports, and at other Airports I have been treated rudely, with disrespect and intimidated to such an extent that on some occasions I now dread approaching Airport Security Operations. This is despite all my efforts to always be polite, remain calm, remove all possible items from my body for the Xray scanner, co-operate fully with all instructions and I always explain to the first Security Officer that I meet at the Xray bench, that I have a prosthetic leg and that the metal that it is made from will cause an alarm at the Primary Screening Walk through detector.

At some airports as soon as I explain this situation, I am then requested in a very quiet and respectful manner to wait until the Xray operator can arrange for another Officer to conduct Secondary Screening. When this Officer is available and ready to proceed they will invite me through the Walk through detector to a less populated area where the Officer will conduct a body search using a Hand Scanning Wand and an Explosives detector. They may also request physical confirmation of the prosthetic by touch and then I am free to proceed with very minimal delay.

At the Airports where I have had bad experiences it is almost as if the first Security Operator that I encounter has no comprehension of what it means to be an amputee, or to be a traveller who happens to have metal implants that will cause the primary detector to alarm.

Usually the first response is “Take your shoes off, put them through the Xray machine and then proceed”. Of course as soon as the primary detector alarms due to the prosthesis, the next Operator tells me to go back and wait until they can organise Secondary Screening. I became accustomed to always removing my shoes while waiting in line at the Screening point and then having to negotiate 20 or 30 metres of polished floor which of course is a slip hazard and could result in a broken hip for the elderly, until in 2012 I was advised by a Security Officer to never remove shoes because the Airport would be liable if I was injured. That was the only time a Security Officer gave me that advice, and I have since refused all requests to remove shoes until I have crossed the polished floors and a chair can be provided so that I can remain seated to remove shoes. This of course causes a confrontation with Security and I may have to argue with at least three different Officers in front of all the other travellers until they realise that we should progress to Secondary Screening.

Another issue that causes more confrontation when Secondary Screening is not conducted in a timely and efficient manner is the safety of my valuables that are left unsupervised on the Xray bench for an extended period of time. Any request to have then supervised or returned while the process proceeds is denied.

The next problem that I encountered with the process and the one that broke the camels’ back for me was during Secondary Screening when a Security Officer using a Hand Wand started to concentrate on the metal zipper of the fly in my jeans. After 3 passes of the wand and 3 alarms I was advised by the Officer that he needed to “check my groin for anomalies” or in other words conduct a “Frisk search” and would I mind. Once again I complied with the request, and never having been asked or experienced this procedure before did I realise the mental anguish, the humiliation, the recrimination or the anger that I would suffer afterwards. This experience had a devastating effect on me the next time that I had to travel by aeroplane. So much so that I spent the whole day before I travelled stressing about approaching the Airport where it happened, and also when approaching some other  Airports where I have never had any confrontation.

Initially I complained to the Airport management where this incident occurred and because of an unsatisfactory response I then communicated with my local Federal MP, the Federal Minister for Transport, the Department of Home Affairs and other relevant Federal Government organisations until finally after almost one year of correspondence I managed to gain a full apology, an undertaking to improve the Screening process and most importantly, hopefully I gained sufficient knowledge about Screening Operations to be able to prevent highly invasive and unnecessary “frisk” searches of sensitive body areas for travellers that have metal prosthetics or implants that they cannot remove when undergoing Screening.

I intend to explain more about the above issues in future bulletins.

During the time that elapsed until my complaint was resolved, I would not hesitate to talk about my experience at any social occasion if anyone asked me how I was going. I was amazed at the amount of similar stories that were related back to me by people who had similar personal experiences or who had an immediate relative, a friend or an acquaintance that had been affected. Some of the stories beggared belief when the behaviour of some Screening Officers was exposed. Currently there is a Disability Royal Commission in progress to explore violence, abuse, neglect and exploitation of people with disability. I implore anyone who has found themselves to be in a similar situation to me to immediately complete a submission to the Royal Commission so that the extent of this problem can be measured, and steps can be taken to help resolve the issues. The Disability Royal Commission can be contacted at the following link:- https://disability.royalcommission.gov.au then click on “Share your story” for more options.